You are here: Home / News / Grimy, broken-down, neglected: Can this be the Eastern Cape’s flagship hospital? 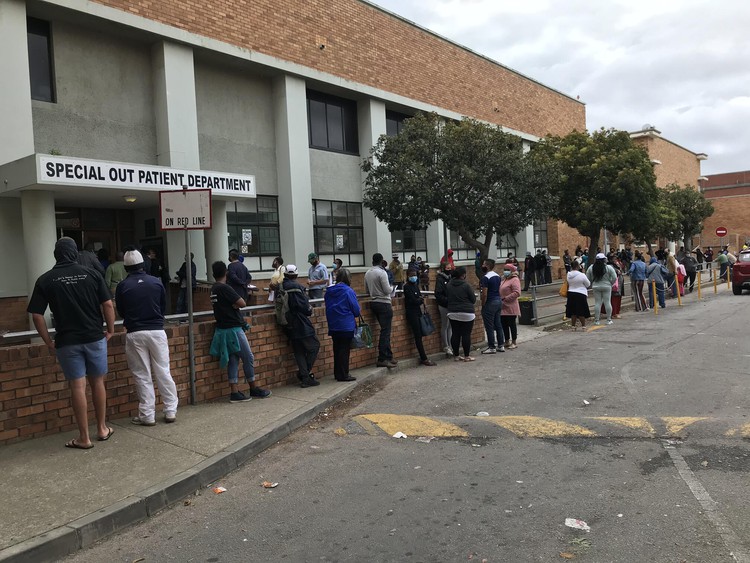 Long before Covid-19 hit, the Eastern Cape health system was already in crisis. Years of neglect are evident at the flagship Livingstone Hospital in Gqeberha, designated as one of the province’s main Covid-19 hospitals. The peeling paintwork, grimy entrances and occasional broken window seen from the outside reflect the state of affairs on the inside.

In November, about the time that Médecins Sans Frontières pleaded with doctors in its network to volunteer at the hospital, GroundUp visited the hospital covertly with a staff member. The staffer revealed that a 50-bed Covid-19 emergency ward, set up in what was formerly a parking basement, had never been used as the hospital was apparently too short-staffed to man it. The beds still had the protective plastic covering they were delivered in.

Half of another 32-bed Covid ward on the first floor, donated by Investec, had been given over to psychiatric patients. When the power failed about a month after the ward opened, it was discovered no backup power had been secured, nor any warning systems put in place.

Staff shortages meant the 16-bed intensive care unit (ICU) ward was often reduced to 12 beds at night because, as each patient in ICU required a nurse, there simply weren’t enough nurses.

The number of beds available in wards was also often reduced because equipment at the workshop, needed for repairs, was broken. Even plugs – essential at each bed for the operation of equipment, some of it life-saving – were not always fixed. A look-in at the repair workshop revealed one technician surrounded by broken and faulty equipment covering every surface and overflowing onto the floor space.

Basic things such as broken windows and door handles were not fixed. In the public areas, such as the toilets, metal fixtures such as door handles and the metal coverings of urinal flush levers in the toilets were missing, probably stolen for scrap.

Another senior staff member said that, due to a shortage of porters, laundry was not being done.

The South Africa Medical Research Council’s weekly mortality reports confirm that, of all the nine provinces, the Eastern Cape has recorded the most excess deaths since May 2020, just under 33,000. At nearly 500 excess deaths per 100,000 people, the province has been hit far worse by Covid than any other province (KwaZulu-Natal is next at 310 per 100,000).

But the problem is much older.

As far back as 2004, the Public Service Accountability Monitor (PSAM) warned in a report that public health care in the province was in crisis, citing overcrowded hospital wards, dilapidated infrastructure, food shortages, broken-down ambulances and neglected state mortuaries. The report questioned the provincial government’s commitment to “deliver efficient and effective public health services to meet the province’s needs”.

The Treatment Action Campaign’s State of Provincial Health Care Report in 2018, based on information from its network of 26 branches, found that little had changed. It cited “a litany of critical concerns with regard to the service delivery at clinics and community healthcare centres across the province”. Among the key concerns listed were a critical staff shortage; poor facility infrastructure and equipment; and the “dire state” of emergency medical services and planned patient transport.

That same year, a Health Ombudsman report into allegations of malpractice and human rights abuses at the Tower Psychiatric Hospital in Fort Beaufort found that the provincial health department’s leadership and governance was in “disarray”, that the work ethic within the department had “severely deteriorated” and that the department “failed to instill consequence management to hold senior staff accountable”.

But, she adds, budgeting and contracting in the province is so opaque that catching corrupt activities in real time is virtually impossible. Even members of the provincial legislature — tasked with exercising oversight over the executive arms of government in the province — are often dependent on “after the fact” audit findings to identify spending irregularities, she says.

A rare exception to this opacity came in the early 2010s when the department’s incoming director-general Siva Pillay set out to identify trends in the graft, recoup lost funds and purge corrupt officials from the department.

Pillay shared some findings with us from a departmental Risk Management Project presentation from 2010, describing the types of corruption uncovered within the department: nepotism in hiring and the selling of jobs, “widespread” theft of medicines and supplies, the falsification of quotations and other documents, false overtime claims by staff, duplicate payments made to suppliers, department employees or their families doing business with the department and an array of other anomalies in the department’s supplier database.

Speaking from his private practice in Kariega (Uitenhage), Pillay said the corruption was enabled by a general lack of spending controls and a system of patronage that was upheld by some of the department’s most senior officials.

He said there was a pattern of department officials incurring expenses and making unapproved payments to companies – often companies in which they themselves had a stake or interest – and then making up excuses to justify the expenses after the fact. The money was almost never recouped and officials rarely faced consequences.

“Everybody was in on it… even an ordinary sister at the clinic, if she’s procuring something she has to get three quotes. She didn’t even bother, because she just went to her three friends to obtain quotes,” he said.

Against the backdrop of state capture, the corruption which flourished during the first phase of government’s emergency Covid-19 procurement was to be expected.

“If you trace things back far enough you will find that at some point there was … politicisation of the procurement function, whereby politicians used powers of appointment, promotion and dismissal and so on to position people open to manipulate the system at the right points and to cross-cut checks and balances and manipulate processes,” says Ryan Brunette, a researcher at the Public Affairs Research Institute.

“You can have your way with procurement at that point. This is what we would call state capture. And that happens fairly pervasively across the South African system.”

Though it is impossible to thoroughly reform the system in the short-term, Brunette says some short-term solutions are possible.

One may be the creation of financial incentives for whistleblowers who can provide evidence of corruption and help the state recoup losses. Payouts to whistleblowers who defect would make it more difficult for corrupt networks within the state to function, as they could no longer trust those within their ranks for fear of defection. Good public servants would be emboldened to speak out. It would also lighten the burden on South Africa’s already oversubscribed law enforcement agencies, such as the SIU, who have been on a massive and resource-intensive fact finding mission since President Cyril Ramaphosa ordered that most Covid-19 procurement contracts be investigated for fraud.

There is ample historical precedent for such a system during times of crisis — the United States False Claims Act, also known as Lincoln’s law, incentivised whistleblowers to curb conmen from selling fake military supplies to the Union Army during the American Civil War.

Such measures are unlikely to take root in South Africa in time for the vaccine roll out, mainly for political reasons. Powerful people would see such a mechanism as a threat and, in any case, the country’s policy-making processes are generally too slow and conservative, says Brunette.

Something more politically feasible and in keeping with the South African tradition may be the empowerment of civil society monitors to observe and investigate the roll out of vaccines and procurement contracts.

Meanwhile, the province’s health workers are managing as best they can. Asked how she, and other staff members maintained morale and managed to continue treating the patients even as Gqeberha was beginning to experience a second wave of coronavirus infections, the staff member at Livingstone Hospital said that every Thursday morning, an increasing number of staff had gathered together before starting their shift.

“We pray,” she said – a prayer for the strength to continue healing the sick and the injured.

Part two will be published on Thursday. Produced for GroundUp by Viewfinder and West Cape News.