You are here: Home / News / Citizens prepare to act for accountability 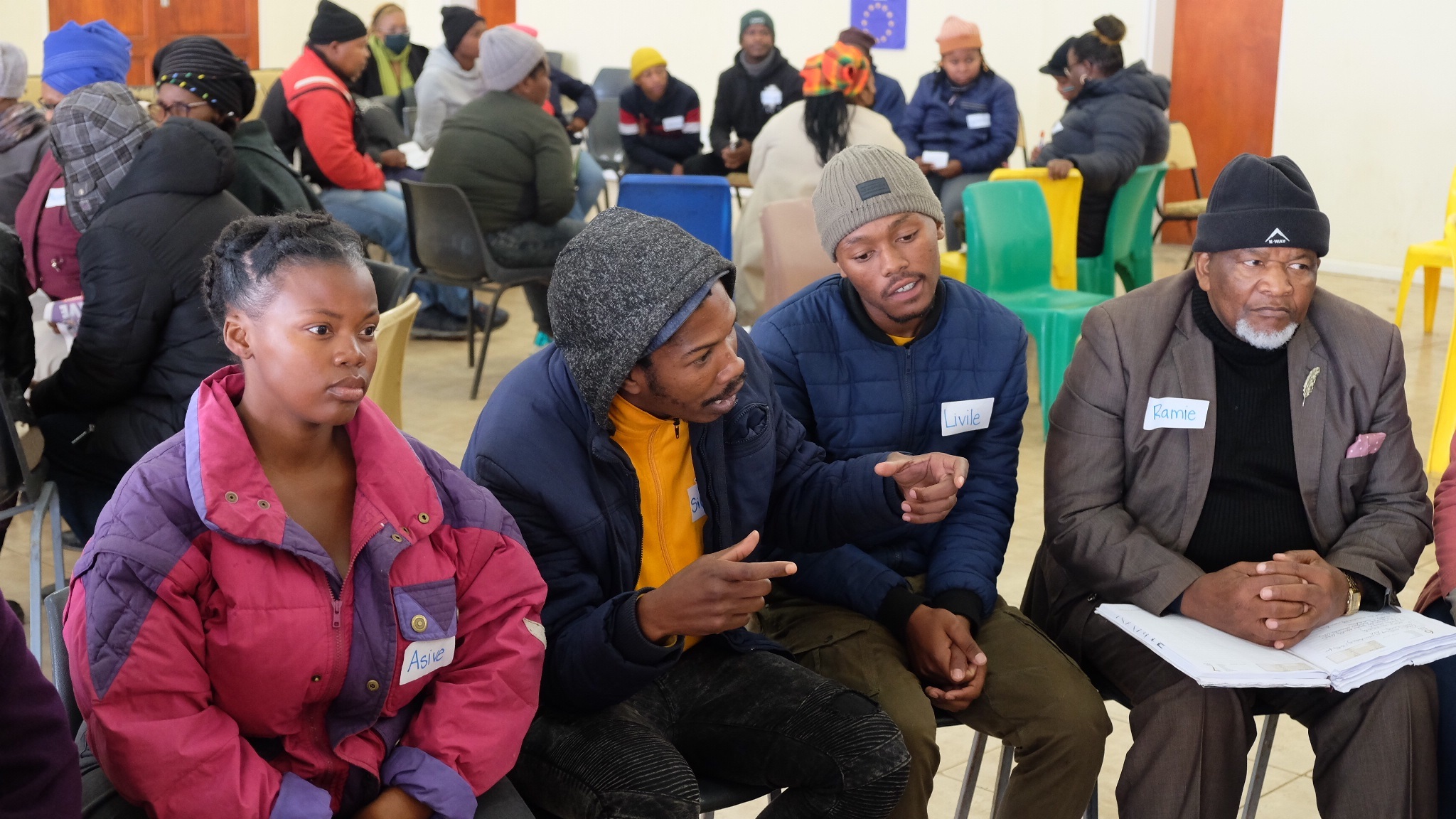 Participants discuss the meaning of accountability at the first meeting of the Makhanda Action for Accountability project at the Extension 9 Community Hall on Wednesday. On the right is ANC Ward 2 councillor Ramie Xonxa. Photo: Rod Amner

What is accountability and how do we get it?

Responses from community members to these perplexing questions at the launch of Makhanda’s three-year Action for Accountability project at the Extension 9 Community Hall on Wednesday included:

Accountability Lab’s Funeka Manzi told around 70 participants at A4A’s first meeting that the project had three primary outcomes. “The first is training the community on how government processes and services work. We have found that many people are unaware of the processes involved, such as the budget,” she said.

“We don’t just want participation but for people to be aware of the processes related to municipal services such as the budget and the timeframe related to that.

“Second, we want to identify and find solutions to service delivery issues and thirdly, we want to celebrate leaders doing a good job.”

Manzi said A4A would use the Civic Action Teams (CivActs) model as a platform to meet and discuss issues communities face.

Communities will select volunteers called Community Frontline Associates (CFA), and with the support of local journalists, they will act as two-way information collection and dissemination units. The CFAs gather monthly information on critical problems affecting their communities through community surveys. They then relay this information to civic action teams to coordinate with local and national power holders.

Validated information on these issues back down to communities through local radio shows, newspapers like Grocott’s Mail, social media and community meetings, facilitating conversations about key local concerns and working with partners to solve problems.

The Civic Action Teams (CivActs) ensure that everyone understands how and when development will take place, building accountability into local decision-making in real-time and closing the feedback loop between citizens, governments, the media and the private sector.

Manzi said accountability included a strong focus on government corruption, which was “a huge problem”.

“We also know our leaders do not know how to be held accountable/answer to the community when issues need to be addressed.

Some major hindrances to accountability raised in the first meeting:

Chamda said A4A was one of four national projects approved for funding by the European Union (EU), focusing on accountability.

“The EU had a high-level discussion with the National Treasury about the one area they should focus on to help South Africa. They agreed on one theme: accountability,” Chamda said.

Chamda said citizens were still very entrenched in partisan groupings when participating in statutory structures like ward committees. “They are still very driven by party political affiliations. But, I sense there is a growing realisation that there are huge gains to be had if you can break out of those little partisan groupings.”

“And a perfect example would be this huge conference last weekend, called Defend Our Democracy. Over 120 civic organisations came together, rising completely above party political affiliations. We had people from all parties in that conference- while you had Rev Frank Chikane, you also had Leon Wessels.

“It will take South Africa some time to get its party political system to fix the country. In the meantime, civil society has realised that they need to start working together to try and find solutions and develop a healthy pressure system on government – to try and speak openly about some of the problems we have,” he said.

So how will this project help?

“Firstly, we want to get the idea across that we have an accountability crisis in South Africa. Nothing highlights it more than the outcomes from the Zondo Commission. At every point, there is a breakdown of accountability, which opened the door for state capture.

“That accountability crisis exists not just in government but throughout society. We have to build a culture of accountability in every corner of society. You can’t ask for accountability from somebody if you can’t be held accountable yourself for the areas over which you have influence.”

This project will run over three years. “It’s a short time – you can’t have a complete cultural shift, but at least we want to get the ball moving and get this community to understand what accountability means in terms of action, not theory. We have enough theory.

“Let’s take the example of a ward councillor – what do they do when they wake up to raise the level of accountability?

“We must understand accountability quite quickly to put it into action.

“This meeting today is not a broad representation of the entire area. We’ll analyse the attendance, and then the PSAM team will reach out to civil society organisations and take this project to them. It is not going to happen if we leave it to political parties.

Tackling one issue at a time

“There are thousands of service delivery issues. But if you take one thing, and you analyse that, and you say that there’s a lack because of a lack of accountability, you have this problem, then the project goes and tackles that issue and puts heat on whoever is supposed to be accountable.

“And if that pressure leads to some corrective measure, then you can hold that up to the community and say, in this little instance, accountability has worked for you.

“Now, can we take on a few more issues? We will look at those small but important things that need to be fixed – it could be from one bad pothole to the problem of the slow funding that is coming for the upgrade to the sewage works?”

“This is not a policing project. If we have to apply pressure, sure, we will do that. But, it’s a project that says, ‘Come, let’s understand accountability and work together. If you’re willing to work with us, we will work with you – maybe we can fix a couple of things. And we’ll use our network to put pressure and call for accountability.

“We will scan this area to discover who the active, open-minded, progressive people are. We will reach out and pull them together into a progressive network for the area.

In Makhanda, civil society groupings – like the Makana Residents’ Association, the Makhanda Circle of Unity, Makana Revive, the Unemployed People’s Movement, the Grahamstown Business Forum and many others – have already taken huge amount of initiative. Yunus said that was “very positive”.

“We have to be brave, because what’s the alternative? Sit back and live in fear while the country falls apart?”