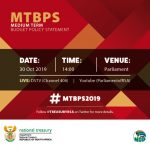 The Budget Justice Coalition (BJC) is concerned that the 2019 MTBPS proposes a deepening of austerity (cutting expenditure to address debt) in the country.

These cuts are proposed in the context of the failure of fiscal consolidation since 2011 to deliver growth or reform in the economy. This has included a decline in spending on education per learner and a massive increase to more than 38 000 vacancies in the public health sector.

Some of the new areas where additional cuts are proposed include Home Affairs, Agriculture, Rural Development and Land Reform, Community Development and Higher Education. Yet these are all areas that require adequate funding to meet national development goals.

The prioritisation of debt repayments and bailouts to State Owned Entities (SOEs) must not crowd out social spending.

We are concerned that the South African government continues to reduce social spending despite the international experience from Greece to Argentina showing that austerity dismantles programmes aimed at reducing inequality and has terrible consequences for poverty and unemployment.

The budget remains blind to intersectionality

We are appalled that no adjustments have been made to the budget despite an important Presidential commitment in September to redirect R1.1 billion towards an emergency plan to combat femicide and Gender Based Violence (GBV). The funding is expected to be appropriated largely from existing provincial government budgets, which are being slashed!

We support the allocation of funds to the emergency plan, however it is important to ensure that it is not taken from other critical services. Government must provide information and the opportunity for discussion on where the additional money should come from.

The BJC reaffirms that the budget overall is critical for transforming gendered discrimination across society. We are committed to an ‘intersectional feminist’ budget and budget process that addresses the situation of those most marginalised in society, including black women, people living in poverty, children, migrants, people with disabilities, and gender non-conforming people, which evidence shows, are the people bearing the biggest impact of austerity measures.

Women are seriously impacted by increased risk of violence including rape because of a lack of safe toilets and insecure transport. To redress inequalities and discriminations of the past, the Treasury should demonstrate an understanding of the lived realities of women and other marginalised groups.

We are concerned that SOE bailouts are impacting on service delivery through budget cuts, yet there is no real plan for how debt will be managed for SOEs. We are concerned by the paucity of accountability mechanisms to ensure Eskom’s compliance with the preconditions for bailouts and loan guarantees. The poor are already bearing the burden of mismanagement of SOEs and would be hardest hit by Eskom’s collapse.

Radical cuts to public sector spending during periods of economic stagnation is self defeating. As government spending constitutes a large share of GDP, reduced spending means lower growth. Lower growth means developmental goals are more difficult to attain but also that tax revenues fall and the debt-to-GDP ratio rises. This is exactly what happened in Greece. Austerity cannot spur economic recovery and will not result in debt reduction.

If cutting government expenditure and public investment during an economic slump is tantamount to economic suicide, what are the alternatives?

The BJC has consistently argued that Government should raise more funds from the wealthy and from high-earning individuals to maintain essential social expenditure. In the short term, Treasury must find a way to plug the gap through:

In the medium term it is critical to:

These taxes are critical not just for raising the revenue necessary to protect hard-won rights, but also to reduce obscene levels of inequality, which the MTBPS acknowledges is a structural barrier to growth.

We welcome the additional allocations to boost SARS’s revenue collection abilities and strengthen the National Prosecuting Authority fight against corruption.

We have argued that failing to implement any of the above ideas, but instead increasing VAT in 2018 was unacceptable, as it is poor and working class families who were hardest hit. We call on government to take these considerations seriously.

Stabilising sovereign debt at sustainable levels should be a medium-term government goal. The most effective way to do this is to raise levels of economic growth so that the debt-to-GDP ratio falls, even if this means increasing borrowing in the short term. The strategic investment of borrowed funds in growth-enhancing activities like infrastructure or health care investments will reduce relative debt levels in the medium-term through increased productivity, revenue collections and higher levels of GDP. This is preferable to cuts in expenditure which translate into lower growth and thus a higher debt-to-GDP ratio. Credit rating agencies have been shown to be particularly sensitive to growth rates.

The MTBPS confirmed that investors are still confident in SA government bonds as global interest rates remain low and that there is therefore room for further borrowing to boost the economy. Moreover, South Africa’s debt levels remain modest by international standards.

Privatisation is not the answer

Is the Treasury ignoring international evidence of this? By 2014, the World Bank had acknowledged that public private partnerships (PPPs) do not work. It “acknowledged that, despite its efforts, PPPs have attracted very little private investment. Even where they have been more successful, the risks were generally borne by the Bank and host country governments” (IEG of the World Bank, 2014 quoted in 2019 United Nations Conference on Trade and Development (UNCTAD) Report). This means that the state ends up subsidising private-sector profits.

“PPPs in infrastructure have, moreover, undermined transparency and public accountability as they frequently appear as ‘off book’ transactions. Infrastructure is a public good that must be broadly accessible, but accessible and inclusive infrastructure may conflict with the objectives of private investors who seek to recover upfront investment costs through user and other fees.”

We must instead develop a long-term plan to invest in the capacity of departments and state entities to spend and manage programmes and projects effectively.

We need cautious budgeting that protects constitutional rights, rather than austerity budgeting

While we applaud the reduction in spending on Ministers’ benefits, there is room to prioritise savings by tackling wasteful and inefficient expenditure. When all is said and done, the state must prioritise anti-corruption, strengthening the management of public resources and take strong punitive action against breaches of Public Finance Management Act (PFMA) and Municipal Finance Management Act (MFMA).

As a party to the International Covenant on Economic, Social and Cultural Rights, the government must align with the principles as adopted by the Committee charged with overseeing the implementation of that covenant on public debt and austerity.

These principles state that any regressive budgetary changes must be:

temporary, remaining in place only insofar as they are necessary; reasonable, with the means chosen being the most capable of achieving a legitimate aim; necessary, with all alternative financing measures comprehensively exhausted; proportionate, in that their human rights benefits outweigh their costs; not directly nor indirectly discriminatory, according priority attention to disadvantaged groups; based on transparency and genuine participation of affected groups and subject to meaningful review and accountability procedures.[1]

The Treasury continues to site the public sector wage bill as a reason for its austerity programme. This is despite the fact that wage expenditure as a percentage of total government spending has been stable over the past two decades. Proponents of cutting  the public sector wage bill are silent on the distribution of salaries within the wage bill, which has become top-heavy, with 29 000 state employees now earning over R1 million, according to Minister Mboweni.

We applaud the efforts made to curb ministers’ salaries and benefits. But we need a plan for public sector employment that is based on competency and capacity to deliver our developmental goals in the long run.

A CALL TO ACTION

There is still time to convince the Treasury not to implement the regressive spending plans proposed in the MTBPS. The BJC calls on all social forces to play their role to challenge and mobilise against the cuts and for a new plan for greater solidarity and growth in our country’s economy.