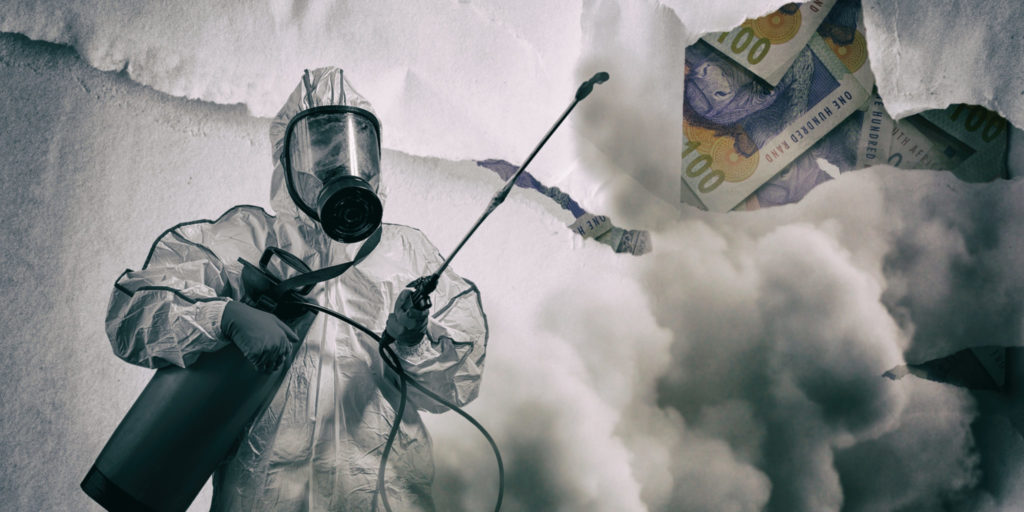 In this series of four articles, we provide an update on our investigations into financial misconduct around fogging in several departments of the Gauteng Provincial Government as well as the Johannesburg city metro.

In a WhatsApp message sent in July 2020 slain whistle-blower Babita Deokaran said: “My biggest issue is the Provincial Treasury. How do all these things happen under their watch and this is not the first instance. It’s as if they are a silent partner and will start acting when the damage is done. With all that has happened at Gauteng Health it is no wonder we are forever struggling to pay our suppliers etc.”

The concerns of Deokaran, who was acting CFO in the Gauteng health department, are borne out by all the evidence we have compiled. Several inquiries were made to the National Treasury (NT) about why such huge sums of money are still being spent by provincial departments on “defogging” and “decontamination” when such procedures are not recommended.

In response, on 27 July the Treasury told us that, “Each government institution will assess the risk of infection based on their own unique requirements and procure the relevant products to ensure the safety of the personnel.”

It added, “Government institutions should follow suitable protocols issued by the Department of Health and align it to the latest version of the National Public Hygiene Strategy and Implementation Plan for Covid-19 and various guidelines issued in this regard.”

But what happens when they don’t, as is evident from the departments we have investigated in Gauteng?

What is the public to make of information that is presented in reports without any explanation or supporting documentation? For example, on its Covid-19 payment dashboard, to be found on the Treasury’s website here, we find that a single company, Red Roses Africa, has been paid R515-million, mainly for hand sanitisers and disinfectants. Other companies that are listed are also billing large amounts for the same thing. Terms like disinfection, sanitising buildings and decontamination litter the reports, but it is not clear what exactly they refer to.

We put these questions to a number of civil society organisations working to combat corruption.

In response, Kirsten Pearson of Corruption Watch questioned the adequacy of NT’s oversight, saying that its response suggested “a deeply entrenched culture of offering a shoulder shrug when tens of millions of rands of wasteful expenditure (at best) and possibly outright corruption (at worst) are pointed out to them”.

Pearson says the Treasury is actively ignoring the financial oversight role that the Public Finance Management Act assigns it “by making use of mandate games”.

Other civil society activists say that an “appropriate response” from Treasury would be “to advise that any department spending money on fogging and other discredited methods should desist from doing as this expenditure is deemed fruitless and wasteful.

“Officials initiating and signing off on the use of such methods should expect to face consequences.”

Transparency should be improving, but instead Maverick Citizen has drawn attention to a regression in transparency and accountability concerning Covid-19 expenditure in Gauteng. But Gauteng is not alone. The truth is that most provinces and municipalities are not publishing Covid-19 expenditure disclosure reports in a form that is accessible or understandable. Access to financial data is hard to come by.

Neither will they assist when asked. For example, on 19 August, Thabo Masebe, spokesperson for Gauteng Premier David Makhura, wrote to Corruption Watch (CW) declining a Promotion of Access to Information Act request for minutes of the Provincial Command Council. He said that the minutes are “regarded as classified”.

The Procurement Reform Working Group is a multi-stakeholder civil society group formed last year to coordinate advocacy for a more effective and responsive procurement system. It includes CW, the Public Service Accountability Monitor (Psam) and the Public Affairs Research Institute. It too has expressed concerns about the quality of data on Covid-19 expenditure now being published by provincial and national treasuries.

Jay Kruuse, the director of Psam, said: “The experience with Covid-19 procurement data published by the provinces has not been encouraging;  the existing dashboards are incomplete and out of date and do not include the requisite detail to allow for meaningful monitoring.”

Karam Singh, the head of Legal and Investigations at CW, stated that: “The mere publication of some information on an official website is insufficient for real transparency. The data must be comprehensive – it must include all information on tender advertisements and contract awards – and its publication must be user-friendly.”

Singh added: “National Treasury needs to be more proactive in ensuring provincial publication of the data meets basic standards of completeness and coherence.”

Kruuse suggested that, “In the interests of promoting greater procurement transparency and accountability National Treasury should introduce an instruction note indicating that should accounting officers not report as required, their details and the extent of default will appear in a monthly procurement progress report that will be made available to the public via the Treasury’s website.” DM/MC