You are here: Home / News / Police, councillors and mob justice under lockdown 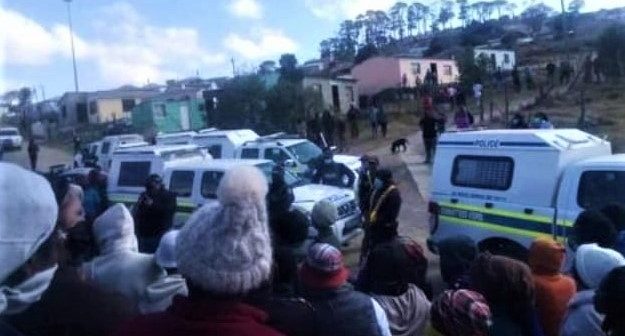 Grocott’s Mail asked the Public Service Accountability Monitor to suggest who should be stepping in to stem the tide of mob justice that has grown in Makhanda over the past few weeks. PSAM Director Jay Kruuse speaks below about the role of the community’s elected representatives – councillors – in addition to the statutory roles of the police and the courts. Mayor Mzukisi Mpahlwa’s response follows.

Self help thrives in current climate

The lockdown’s diverse effects include job losses; a steep decline in casual labour; the closure of schools; difficulty or delay in accessing grants; anxiety over contracting Covid-19; prohibition on cigarettes and alcohol sales and more. All these have all come together to present a severe mix of demands and challenges.

Prior to Covid, communities in Makhanda felt let down by an under-serving (many feel it is corrupt and dysfunctional) municipality and police force. In the current climate, there is an increase in self-help.

All towns have their share of career criminals. But extreme poverty, addiction and other factors will push people to resort to crime as a means of meeting needs, addiction and survival.

Communities who see criminals rampantly going about their ways, including a quick return to the streets when they have been arrested, will eventually come together and act. If these communities have little or no faith that the SAPS will do their job against criminals, then they are often prepared to inflict mob justice as they are bolstered by their past experiences that the SAPS does not have the will or capacity to also act against them when they take the law into their own hands, so to speak, and commit criminal acts against suspects.

Fears of contracting Covid (and sick leave spikes) may also be resulting in SAPS members being less visible/active within communities – this then creates opportunities for criminal elements to become emboldened.

Where are our municipal councillors and ward committee reps? Where is thir voice amid such mob actions? What are they doing to communicate with frustrated mobs? Are councillors engaging the SAPS, the NPA and the Magistrates and High Court to get to grips with law enforcement breakdowns?

Mob justice has no place in the democratic dispensation

First and foremost while we understand the frustration of communities about the high rate of crime, we as the council condemn in the strongest terms taking of law into their hands by community members. People suspected of committing crime must be reported to the police. The recent spate of mob justice has no place in the democratic dispensation

This mob justices takes place during level 3 lockdown – where public gatherings are prohibited. This makes it difficult for councillors and ward committees to convene physical meetings in order to avoid breaking lockdown regulations. One ward Councillor was threatened with arrest for holding a public meeting in the open veld.

It is not easy for all of us to adjust to the new normal, including the councillors. As the municipality, we have planned a series of workshops to train councillors how to perform their tasks under the Covid-19 regulations

Ward councillors have established WhatsApp groups with their ward committees. They use this tool to communicate among themselves. In certain instances councillors have met with the leaders of the mobs and engaged with them in an attempt to show them that they are in breach of the law by taking law into their own hands. One ward councillor has a WhatsApp group with leaders of these mobs.

Ward councillors are activating war rooms. War rooms are the forums at ward level where all departments and NGOs meet to deal with all service delivery and other challenges. One ward councillor enlisted the services of the civic organisation and the police.

Our partners, @WLCCapeTown and @PSAM_AFRICA, are among a group of CSOs calling for more transparency in the country’s vaccine roll-out strategy. In particular, they state that the strategy should be inclusive of undocumented, marginalised communities.
https://www.news24.com/news24/opinions/letters/open-letter-to-the-president-covid-19-vaccine-for-undocumented-people-20210224