You are here: Home / News / Council appoints Mazwayi to top job, unaware of her past in Makana 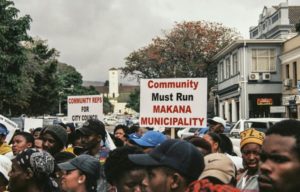 The ANC in the Cala-based Sakhisizwe council has appointed Nomthandazo Mazwayi as municipal manager, despite the administrator having left the Makana municipality under a cloud.

A Makana report, dated August 8, recommended that Mazwayi, then director for corporate & shared services, be placed on compulsory leave for a month after allegations of misconduct. These related to alleged salary increase irregularities, insubordination and poor performance.

She resigned before the municipality could act on the recommendations.

A Sakhisizwe council recommendation seen by the Dispatch puts Mazwayi as the first choice of three candidates.

“ … She scored competent which means she is suitable for the position,” the recommendation said.

“She was also found to be competent during the competence assessment process. Her current salary is R1,257,894. In her letter dated September 8 2020 she asked for the top notch of the municipal manager’s salary scale.”

The report does not unpack the allegations against her from her time at Makana.

Approached for comment, Mazwayi asked to be contacted later. When the Dispatch asked her to confirm her appointment, she sighed and hung up.

But DA councillor Monwabisi Malungisa confirmed the appointment and said there had been a meeting on Wednesday morning where Mazwayi was “formally introduced”.

All three opposition parties, the UDM, EFF and the DA, objected to the appointment, UDM councillor Yanga Ndik saidi.

Makana municipal manager Mmopo Mene had not responded to a Dispatch query at the time of writing.

In January, high court judge Igna Stretch ordered that the Makana municipality be dissolved and placed under administration.

The provincial government and the municipality appealed the order.

Asked last Thursday if she was aware of Mazwayi’s history, Sakhisizwe mayor Buyiswa Ntsere said: “What? I would not like to respond to that because I have not got that. Send it to me, let me see.”

Asked if the municipality had done any due diligence, Ntsere said: “Let me look for it. I will revert to you.”

By Wednesday, the mayor still had not come back to the Dispatch. She was also sent a query at the weekend and a reminder on Wednesday.

The Public Service Accountability Monitor also chimed in, writing on its website that Mazwayi had resigned after being charged.

The PSMA believes the Makana council failed to back the recommendation for her suspension, adding that her resignation should not have been accepted.

Writing to Nqatha on October 12, Calusa said: “We note with dismay that the Sakhisizwe municipal council has appointed former corporate services director of Makana municipality, Ms Nomthandazo Mazwayi, to serve in the position of municipal manager, while she allegedly has pending charges of misconduct at the Makana municipality. ”

Calusa wanted to know whether Cogta was aware of misconduct charges against Mazwayi and the Makana municipality’s apparent failure to institute disciplinary proceedings against her.

“We ask this against the backdrop of our engagement with your office concerning the Sakhisizwe municipality wherein you informed us that your office is committed to renewal, which is characterised by good governance and upholding the rule of law.

“In light of the above we request your office look into the allegations against the incoming municipal manager, review her appointment in Sakhisizwe and take appropriate remedial action if the allegations are found to have any merit and that the Makana municipality failed to take disciplinary action,” the students said.

Our Head of Monitoring and Advocacy, @ZukiswaKota joins an interesting discussion this morning on recent policy developments and announcements by @thedpsa in relation to the #PublicService #accountability #statecapacity